#WexMondays 'Get The Shot' - Buttercups and Cow Parsley

As much as I can I enter a weekly photographic competition on twitter run by 'WEX Photographic' called #wexmondays. Every Monday they invite you to post your best image taken in the last week. The images are then judged and on Tuesday they announce 1st, 2nd and 3rd place with points awarded to each, then at the end of the year, whoever has the most points is named 'Wex photographer of the year' and gets a £1500 voucher. Second and Third places get £500 and £250 vouchers respectively. More details here.

At the start of this year I set myself some photography goals, one of which was to get one of my photos in the top three of the #wexmondays competition. I enter as often as I can, but don't always get the chance to go out with my camera. This week however I had been out about three times and had a good selection of images to choose from. The photo I selected to enter is one that worked out very well and that I am very pleased with. Although it did not place in the competition it did get a lot of interest on twitter, and the next day I was contacted by WEX Photographic asking if I wouldn't mind writing a behind the scenes 'get the shot' blog about the photo. Of course I was only too happy to do this for them.

Where, why and how I took this photo

Southam is a small town in Warwickshire, between Leamington Spa and Daventry, and is surrounded by lovely countryside, small villages and farmland. It is also where I live and where 90% of my photography takes place. I have walked most of the footpaths and surrounding countryside over the years and I know the area incredibly well. The field where I captured the "Buttercups and Cow Parsley" image however, has been one that I haven't paid much attention to. I think mainly because the footpath through it doesn't really lead anywhere, just to the main road and then back into town. Of course I have been trough it before but never really given it a second thought. It is also used by all of the competitors for the neighbouring polo ground for all of their vehicles and horses, meaning the ground is normally quite churned up.

I had the opportunity on a Tuesday evening to get out with my camera, the conditions were good with clear skies for some nice golden hour light. I decided to walk to some small lakes in the grounds of the 'Dallas Burton Polo Club' which sits just outside Southam, around a half hour walk from my house. I didn't have much luck here, as the sun had already dipped too low and the lakes were in shadow and there wasn't much in the way of wildlife there on this evening. Cutting my loses and not wanting to miss out on the gorgeous light I walked back around the perimeter of the polo club and towards a small copse next to the river. No luck here as well. Overgrown with stinging nettles and other foliage, it was impenetrable. Walking back down the footpath trying to think of another backup location I could get to quickly enough, I happened to look to my left at just the right time. 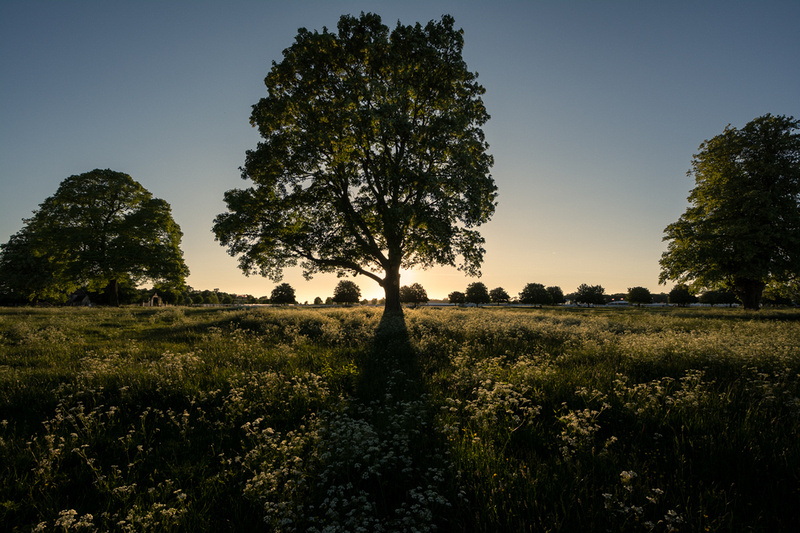 I was very happy with the look of the photo in the back of the camera. Upon reviewing it when I got home however, I felt like it was lacking something. The sky felt a little bit empty and a bit too bold. And I wasn't completely happy with the composition. Wanting to return and redo this photo I checked the weather forecast for the rest of the week and made plans to return.

When I retuned two days later, on Thursday, conditions were just as I was hoping for.

I got there early so I had enough time to get set up and find a good composition. While I was waiting, with the sun moving through the branches of the tree, it lit up a small patch of buttercups a few meters in front of me. Not wanting to miss this chance, and as a good opportunity to make the most of my brand new 10-24mm lens, I immediately acted. As the lens is so new I haven't yet had chance to buy new filters and holder that fit it without you being able to see them. This was a slight problem. Because the photo above was taken on a tripod I was able to hold the filter (2-stop graduated ND) in front of the lens myself with ease. I knew I wouldn't have time to reset my tripod and then move it back again to get the photo you see above, so it would have to be a handheld job. Kneeling down and hunched over amongst the cow parsley I fiddled with the settings, found a good composition and focused on the base of the tree. Holding my camera (in portrait) in one hand and a 2-stop graduated ND filter in the other I reeled off a few shots, thinking myself lucky if any of them came out sharp enough or balanced enough to use. Fortunately they turned out fine, and the resulting photo (below) is one of my favourites I have taken, and the was the obvious choice to enter into #wexmondays. 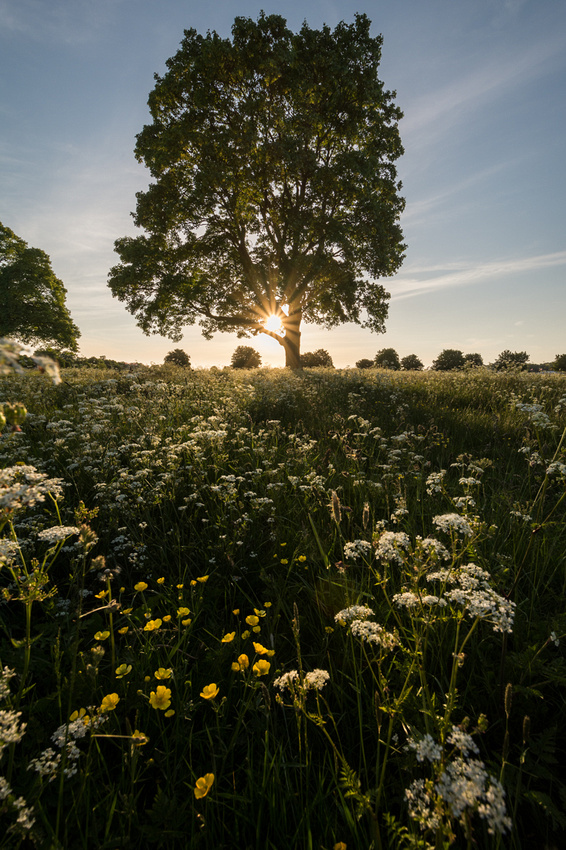 All of the post-processing for this photo took place in Lightroom 5. For this image I first checked the 'Enable Profile Correction' box which I do for all of my images and then set the white balance to daylight to bring back some warmth. I then added a graduated filter for the sky and tree, bringing the highlights down and the shadows up. I then added a separate graduated filter for the foreground with a small increase in clarity. I then did some overall adjustments bumping up the exposure by half a stop, bringing up the whites a touch, small amount of saturation and luminance changes and the finally sharpening of the tree and foreground.

Overall this shot was not that hard to take. Trying not to shake around too much while shooting with a handheld filter and a handheld camera was probably the trickiest part.

Snipsnapper(non-registered)
What a stunning image, your perseverance paid off, beautifully framed and exposed perfectly, thank you for writing about this shot, i like to learn from such wonderful work, much appreciated!
ps i came here after finding your pictures on Flckr, inspiring images!
anone(non-registered)
Loving the work you do and the area is also local to me and may just have to take my kit along to see what your seeing, keep up the good work,in the mean time I'm I'm going look at your pics again, you never know we may meet on location and share images.
a.momin(non-registered)
A Beautiful scene giving you an amazing picture :) The light is spectacular.
Thank-you for writing about how it all happened - much appreciated.
No comments posted.
Loading...
Subscribe
RSS
Recent Posts
Seasonal - Autumn 2021 Seasonal - Spring 2021 Seasonal - Winter 2020/21 An Hour in the Dunes A new beginning and a roll of film Water Water Everywhere - Cader Idris, Penygader #WexMondays 'Get The Shot' - Buttercups and Cow Parsley
Archive
January February March April May June July August September October November December
© Justin Haynes 2021
Powered by ZENFOLIO User Agreement
Cancel
Continue