Boots, socks, trousers, underwear, t-shirts and waterproof coats all completely saturated. This pretty much sets the tone of our two days on Cader Idris.

My friend had mentioned to me a few months previous that he was planning "a trip to a mountain in Wales in June" as part of an artist residency. As vague as the plan was at the time and unsure if would actually ever happen I agreed, providing I had nothing on.
Anyway, a month or so and a wedding later, having completely forgotten about it I received an email with full details and timings of the trip, we were on. The point of the weekend? To do something we had never really done before, to inspire and to develop existing and/or create new works in each of our respective fields. A fantastic opportunity for photography, fun and meeting other artists awaited. I got straight on with researching the area, studying maps and browsing photos to get an idea of what I was in for.
(For info on the others on the trip see the bottom of this page).

Day 1.  We left early but with probably a few too many stops didn't arrive until around midday, we found our site 'Owen Tyddyn Farm Campsite' basically a field with some sheep in it, and set up camp. Having got our bearings we had a bit of lunch, packed our bags and set off along the Minffordd path from the north side of the mountain. At first the going was quite easy with cloudy but nice weather and in high spirits we set off with a good pace, occasionally stopping to do our various bits and pieces, mostly unaware of the very poor conditions that were to greet us soon. As the path got steeper towards the ridge line we started to take more frequent breaks, all realising we were not as fit as we thought, which was no bad thing as I had decided to take all my camera gear including my big heavy tripod which I soon regretted taking. We kept pushing on though, into the cloud, with people passing us on their way back down telling us that conditions were very bad along the top. They were not wrong. The ridge line was engulfed in thick cloud which covered the rest of the path to the peak of Penygader, the wind had picked up and almost knocked you off you feet at times, it was raining hard and visibility was at best ten meters so you could hardly see the next cairn on the route and we still had about a 45 minute walk to the peak. By now thoughts of doing our work had firmly vanished and it became purely a mission to reach the top, we hadn't come this far to not make it, luckily there were still quite a few people climbing and continuing carefully we knew we would be ok. And so apart from me making very quick stops to photograph a fence line when the rain eased slightly, whipping the camera out quickly composing and shooting and back in the bag before it got too wet we all got our heads down and eventually made the peak. 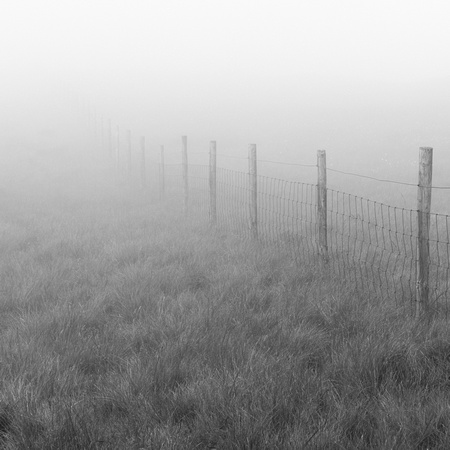 Something out of Nothing 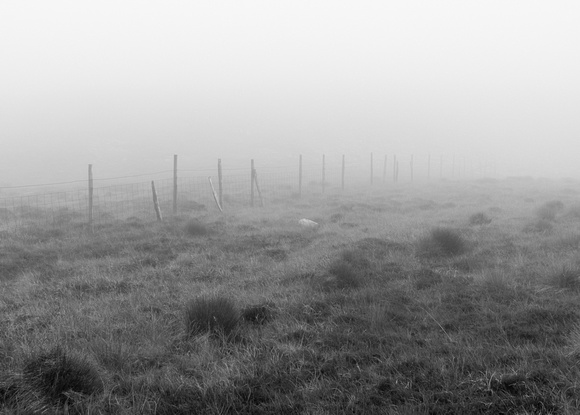 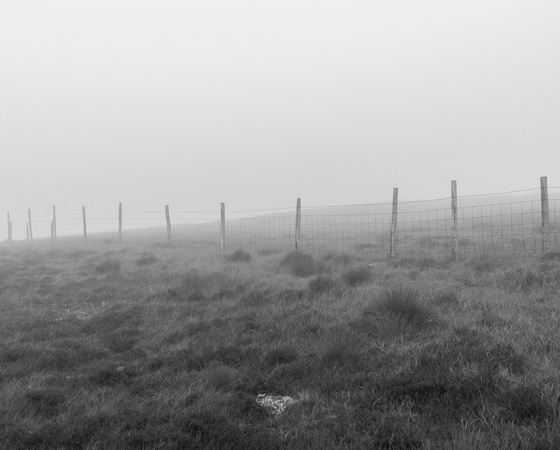 Having taken the obligatory selfie and not wanting to hang around in those conditions all completely soaked and cold we turned around and headed back to camp. 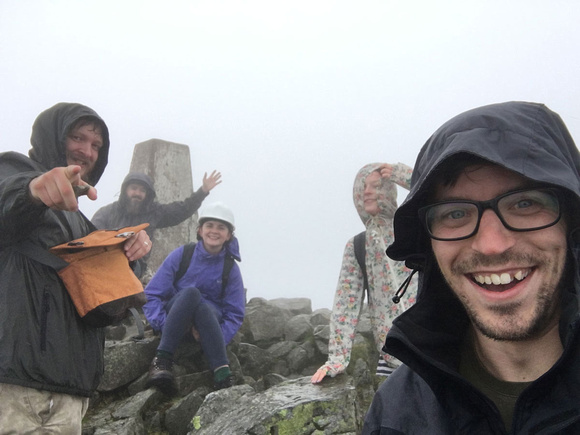 The journey back down was as wet and treacherous as the way up, even below the cloud where the sun had gone and the wind and rain continued. Although we were treated to a fantastic show as the clouds blew away revealing the wonderful view, we couldn't help but to stop and watch it for a few minutes.
Back at camp all completely exhausted and utterly soaked through we changed into what dry clothes we had and went to the pub for some well earned food and drink.

Day 2. I had planned to wake early and get out to maximise shooting time. However exhaustion coupled with having had a surprisingly good nights sleep in a tent on the floor, I didn't get up until about 8 o'clock. With a quick bite to eat for breakfast and some moaning as we pulled on our wet boots and coats me and the two other guys headed out to continue the work we couldn't complete the day before.
Stopping to photograph occasionally I fell behind the other guys. 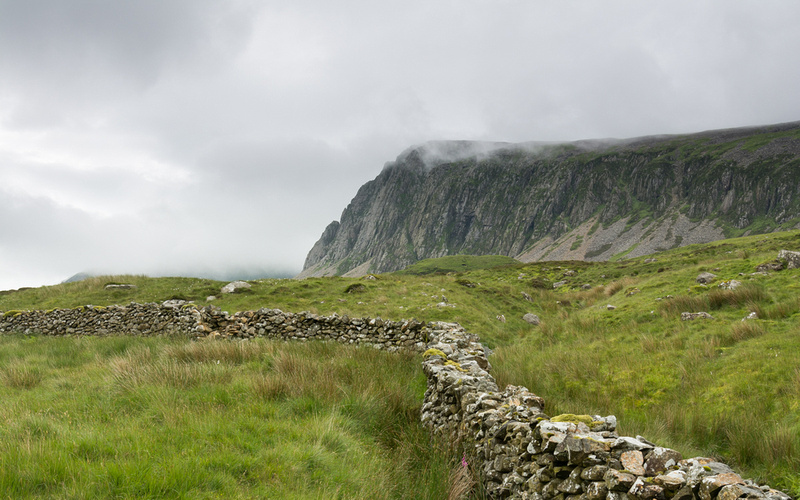 As far up as I got on the second day. This was the cloud cover at its thinnest.

They met up with me on their way back and I didn't get as far up as I would have liked to capture the views, but time was tight. We had planned to drive to the other side of the mountain and walk up to the lake 'Llyn Cau' that sits underneath Penygader. We got back to camp packed up all our gear and headed off.
The south side of the Minffordd path was even more beautiful than the north. Leading up adjacent to mountain stream with waterfalls, bits of woodland and wonderful views. With the low cloud and mist hanging around it presented some fantastic photographic opportunities, if it wasn't for the rain which was back with a vengeance. Again I couldn't help but stop occasionally to quickly get some shots although this time I left the tripod out. I soon regretted this as well with some amazing opportunities for some long exposure work missed. I don't think my shoulders could have taken the extra weight again though. 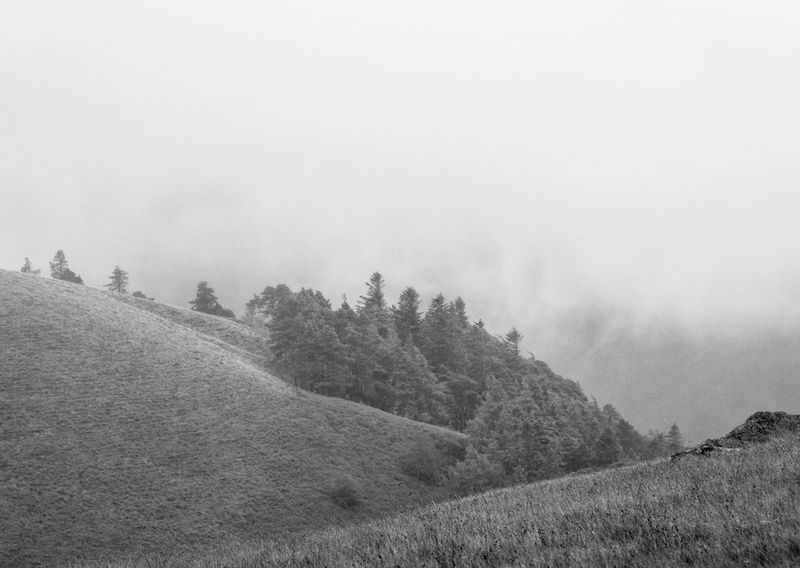 Reaching the lake made all the effort worth while, even with the cloud, cold and rain it was exceptionally beautiful.

We didn't hand around too long, aware that everyone was wet, cold and by this point just wanting to go home, we had a quick bit of lunch and started the walk back the car.
It was a shame that it rained so much and that we didn't have more time, I could have spent ages exploring the area, and knowing how many opportunities I missed out on was a bit gutting. At the end of the day though that fades into the background and i'm left with the memory of a fantastic trip in beautiful surroundings with great people. I will return one day and photograph it more, although perhaps in slightly more favourable conditions. 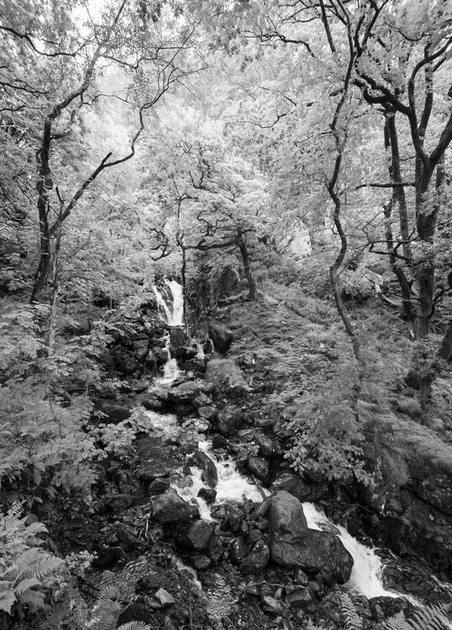 The one that got away. I almost like this one. With some more time to compose and expose properly and a tripod so I could focus properly (its slightly out) it could have been better.

The trip was organised by and for: Office for Art, Design and Technology.
Based in Coventry but expands and operates nationally from there through a range of partnerships with cultural organisations, practitioners and local authorities. www.art-design-tech.org

Ryan Hughes is a Birmingham based artist/curator. Most recently he has been working on the borders of research, curatorial practice and collaborative practice with a particular focus on the spaces that exist between fields. He founded and runs Office for Art, Design and Technology.

Imogen Frost is an artists based in Warwickshire. She graduated from Birmingham Institute of Art and Design in 2015 and works predominantly with traditional photography techniques and sound.

Emily Roderick is an artist based in London. She is currently in her first year at Central Saint Martin’s and works predominantly with computer code, performance and sculpture.

Tony McClure is an artist based in Birmingham. He is currently in his second year at Birmingham Institute of Art and Design and predominantly make’s moving image and light based work.